Despite the steep out-of-state tuition, and the heat, thousands and thousands of you arrive here in Tucson early each August, to bask in the sunshine and perceived glory of attending the University of Arizona. As of 2014, it’s a $30,000.00 price tag, just for tuition and fees. Thirty-seven thousand undergraduates pooled in a few square miles near downtown Tucson. A new luxury student housing apartment just went up, a block from campus, with a roof-top pool. A university professor let his kid, a freshman, live there this year, Fall 2014.

Most of you obviously could have gone elsewhere. If you stayed in-state, in the mid-west, the east, or even southern California, you would (not could but would) have saved tens of thousands a year. Maybe a hundred thousand, over four years. Even some of the smaller in-state schools, like Cal Poly or SUNY Geneseo, are pretty damn good, in some academic respects arguably better than U of A. But in at least one respect (other than basketball), Arizona inarguably beats them all. If you’re reading this, you know what I’m talking about.

When you toured campus, looked at the chemical blue sky above Old Main, the sun that wraps it’s arms around you, the throngs of students, marching across the mall, tanned, in flipflops and shorts, in March, when you read the color brochure, talked with admissions officials, the Registrar, the Bursar, nobody told you one thing: that every single year thousands of University of Arizona students like you get charged with crimes. Moreover, not just any crimes but the very crimes that are the byproducts of what a lot of you implicitly came here to enjoy — crimes you might not have been charged with at all if you had gone to Cal Poly, or Rutgers, or SUNY Binghamton: DUI, “Unauthorized Possession of Marijuna,” and the ubiquitous “Minor in Possession of Alcohol.”

We get uncountable phone calls every year from both students and parents, thousands of miles away.

I highly doubt that the Binghamton, N.Y. police, or the San Luis Obispo police, or the Humboldt police, or even the Camden, New Jersey police, and their university counterparts, do to college students, by policy or practice, what the police do to you here in Tucson.

Nobody told you that Arizona, as a state, has a very conservative law enforcement culture. And that that culture extends to its treatment of students. Nobody told you that the University of Arizona Police Department ( our university and its police are part of Arizona state government after all), is very aggressive and doesn’t look the other way when college students are having fun—the same sort of fun you might be quietly or raucously having at Humboldt State or San Diego State, or Rutgers; that the University of Arizona Police will come right into your dorm room and search it, and arrest you for a single bud of marijuana or a single can of Coors Light, and in some cases, a surprising number of cases, actually book you into the county jail for the night. Nobody told you these things when you paid your $30,000 tuition.

Nobody told you, moreover, that UAPD is very aggressive and skilled at stopping you as you innocently leave that frat house party or your own dorm—Coronado let’s say– on a Saturday night– and make an excuse to check you for alcohol or marijuana.

Moreover, the Tucson Police Department, our local police force, has an even more aggressive and successful DUI program around the University of Arizona campus: they hover around 4th Avenue, where all the bars are, especially on weekend nights, and reel in thousands of you every year: They simply hang out, like anglers, on a few selected corners and wait for you to swim by, to make the inevitable “wide turn,” or “speed” or commit some other minor violation everyone makes and police seldom enforce in the day time. And then they’ve got you on the hook.

To put the numbers in perspective, for 2013, the Tucson City Court– let’s call it a pond–where almost all the off-campus student misdemeanor DUI prosecutions are pooled, reported 5,193 misdemeanor DUI cases. And although the City of Tucson comprises a full 226 square miles, a large percentage of these DUI’s, I dare say, were caught in a tiny two square mile patch—within half a mile of campus– particularly on the West side, near the Fourth Avenue corridor, a river of bars and clubs.

To put these numbers in further perspective, for 2013 the City of Phoenix Municipal Court, the 5th busiest court in the entire United States, actually had fewer criminal cases than City of Tucson Municipal Court (52,030 versus 34,890 for Phoenix). 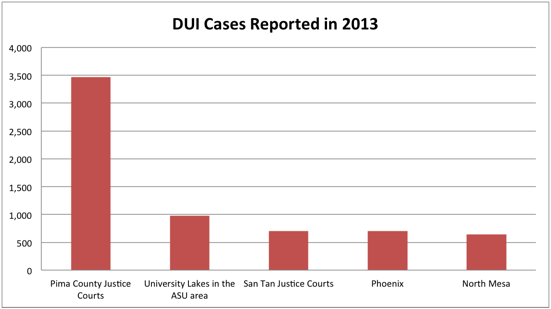 Similarly, the Pima County Justice Courts, another collection pond, where almost all the University of Arizona on-campus and UAPD near campus misdemeanors get prosecuted, reported 3,468 DUI cases for 2013. No other Justice Court in the state reported more than 700. (University Lakes in the ASU area reported 977, San Tan Justice Courts, also Phoenix, 700, North Mesa, 640). To be fair, Pima County consolidated their Justice Court system among a handful of judges, pooling their cases, but I venture to say notwithstanding, that a surprising number of those DUI’s involved either the University of Arizona Police, U of A students, or both.

Since the passage of the Arizona Medical Marijuana Act, we have seen a sharp increase in DUI arrests. This article will clarify the current state of Arizona DUI-marijuana laws.

But, given what I do for a living—I’m an attorney who defends professionals, their businesses and families in criminal matters, and am called upon to represent many students in precisely these cases– and given the fact that I’m simultaneously a University of Arizona parent, I couldn’t help but notice that no one has, to my knowledge, spoken up.

So I will. At the risk of sounding philosophical, I’ll say that originally our American criminal justice system was based on applied moral philosophy: it was a collective judgment that some acts, or omissions, were so morally reprehensible that we would brand the malfeasor “a criminal,” a demarcation, like Hester’s “A” , that would not only spell shame, but purposely deprive the malfeasant of certain rights and privileges.

But as an attorney I can say that the original foundations of our criminal justice system are now in many ways unrecognizable. As a parent of three millenials I worry. The new millinium, our age, is an age if mass criminalization of minor and regulatory matters; this is an age of mass conviction. And the current law enforcement culture here in Tucson on and around the University campus is evidence of that.

In Arizona, unlike other states, a conviction, even for a misdemeanor, is like tattoo: presumptively indelibile, and won’t let you forget it’s there. Unlike other states, in Arizona there’s still no rehabilitative expungement of adult criminal records. Even for misdemeanors. When people ask me, “How long does a conviction stay on my record?” (and they ask me that a lot), I tell them that if it’s an Arizona conviction, in the digital age, in 2014, the only fair answer is “decades.”

And these convictions, even for misdemeanors, have a few hidden unpleasant consequences. What do you think, for example, the Human Resources Department at Goldman Sachs does when a promising Eller student, applying for an internship, “checks the box”? That begs the question as to why H.R. would even put the question on the internship application if they didn’t care about the answer. What about the medical student applying to B.O.M.E.X for her license? Or the student teacher applying for her mandatory “fingerprint clearance card.” Or (for you creative writing majors, like me), the standard employment applications for Starbucks, or Circle K, or 7-11, or Walmart. All of those places have human resources departments. All of them ask the question.

You can get a DUI in Arizona without a drop of alcohol in your system. Just having the drug or metabolite of marijuana in your body is enough to get you DUI 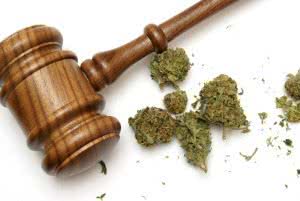 You might say, “ but it’s only a misdemeanor.” After all, a recent President of the United States had at least one documented DUI conviction, and his Vice President had two. And you could correctly point out that despite these DUI’s, George W. Bush and Dick Chaney rose to the apex of professional and political power. But those DUI’s that President Bush and Vice President Chaney got weren’t any less dangerous back 40 years ago than the ones being handed out in Tucson today. In fact, if anything they were more dangerous, at least by the logic of the National Highway Transportation Administration, the University of Arizona police Department and Tucson police. The alcohol limits back then were at least 20 percent higher. It’s not that people could drink more back then and drive safely, it’s that the accepted standards changed. Society has made the proverbial collective moral judgment. If President Bush and Vice President Chaney had got those DUI’s today, in Arizona, here in Tucson, at the University of Arizona, they’d be in some serious trouble. And face a few lingering consequences.

They say that it’s sunny here in Tucson 300 days a year. But law enforcement culture has cast a long shadow over what should by all rights be a bright educational experience. A University of Arizona Dean recently boasted that at University of Arizona some of the most important parts of education happen “outside the classroom.” But I’m here to tell you that being arrested in Tucson is an extracurricular educational experience you don’t want.

My job, as I view it, is to not only skillfully, carefully, aggressively, and successfully represent each and every one of you, but to guide you, to educate you, about the criminal justice process here in Tucson, about your future, about how criminal charges can affect you. I hope that this essay has in some small measure met that end.