Even the most experienced immigration lawyers can sometimes be completely baffled as to why USCIS denies a particular petition, especially when USCIS claims the applicant committed some type of fraud. In these cases, it can be very difficult to obtain the exact information which led to the finding, which also makes it difficult to develop a strategy for appealing the decision.

Last week, the 9th circuit court ruled that an American citizen’s due process rights were violated when the BIA denied his spouse’s immigrant visa petition based on undisclosed evidence and that the standard of proof the BIA used for establishing marriage fraud was too low.

The petitioner, Mr. Zerezghi, an American citizen, filed an immigrant visa petition for his spouse, Ms. Meskel. But, USCIS denied the petition because it claimed that Ms. Meskel’s previous marriage to another American citizen was a sham marriage, which is grounds for denial of future petitions where she is a beneficiary.

USCIS arrived at this determination after reviewing prior addresses listed on the apartment lease for the apartment where Ms. Meskel lived with her ex-husband (who had filed an immigrant visa petition for her.) This lease listed two previous addresses for Ms. Meskel’s ex-husband that did not match the previous addresses that he listed on her immigration application, so USCIS determined that the couple had not been living together. This was the primary evidence that USCIS used to determine that Mr. Zerezghi’s wife had committed marriage fraud in her prior marriage to another American. This lease was not submitted to USCIS by Ms. Meskel, but USCIS visited the apartment office and the office manager gave USCIS a copy of the lease. 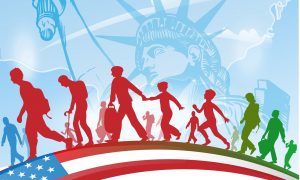 Since the Court has already established that a U.S. citizen has a constitutionally protected interest in the approval of their spouse’s immigration petition, the U.S citizen is entitled to “procedural due process,” basically, the process that is used to deny his spouse’s petition must be a fair process.

Here, Mr. Zerezghi was not told about the apartment lease from his wife’s prior case. He and his wife argued that if they had been told about it, they could have provided an explanation. The Court agreed that this was unfair, especially since this piece of evidence was the primary piece of evidence USCIS used to determine Ms. Meskel’s prior marriage was fraudulent.

During her immigration process with her ex-husband, she had actually given an explanation to USCIS about the address discrepancies, but she and Mr. Zerezghi did not realize that this was the main reason that her current petition was being denied.

According to Ms. Meskel, she is from Eritrea and her family arranged her marriage to her ex-husband. She received a conditional green card, because she had been married less than two years. When she moved to the U.S., she lived with her ex-husband for the two year period, during which he became physically abusive, refused to get medical care for her, and told her she had no rights because she was not an American. After the two year conditional period, he did apply for her permanent green card, but they had already separated. USCIS visited the apartment and saw no evidence that a man lived in the apartment and asked the apartment manager for a copy of the lease (which did list her husband as an occupant but with different prior addresses listed on his rental application than those he listed on the immigrant visa application.) When confronted with the discrepancies, Ms. Meskel told USCIS that her marriage was initially a real marriage and that his abuse led to their separation, but they did not believe her and denied the petition. Shortly after her divorce, she married her current husband Mr. Zerezghi, but since she was previously implicated in a petition that USCIS determined to be fraudulent, she was not eligible to be the beneficiary of the new petition.

Marriage Cannot Be Determined Fraudulent Without Preponderance of Evidence

The Court also held that that the BIA was using too low of a standard to determine whether a marriage was fraudulent. The government insisted they could deny a marriage-based immigration petition if “there was evidence of marriage fraud, even if it was more likely than not that the marriage was bonafide.” The Court disagreed, holding that there must be a “preponderance of evidence” of marriage fraud for the petition to be denied, meaning that there must be more than a 50% chance that the marriage is fraudulent, based on the evidence.

In this case, USCIS is also questioning the validity of the marriage between Mr. Zerezghi and Ms. Meskel, in the new petition. So even with this Court ruling, USCIS will still continue their investigation into the validity of their marriage, under this new standard.

If you are involved in an immigrant visa petition, you should take any accusation of marriage fraud very seriously. Once USCIS has made a determination that the marriage is likely fraudulent, any future petition for that beneficiary must be denied; it is mandatory. This penalty applies regardless of whether the beneficiary actually received the visa or whether any criminal charges were filed. If you have been accused of marriage fraud, you may need an immigration attorney and a criminal defense attorney, depending on your circumstances.