On Tuesday, November 17, Attorney General Loretta Lynch, in her first oversight hearing before the House Judiciary Committee, fended off hours of tough questions from Republicans who voiced skepticism that the U.S. can effectively screen prospective refugees seeking to enter the country from Syria.  Lynch defended the U.S. screening process, but she conceded there can be “challenges” posed by the country’s chaotic civil war.

On December 9, 2015 District Judge David Godbey denied a request for a second temporary restraining order to halt the settlement of Syrian refugees in Texas. 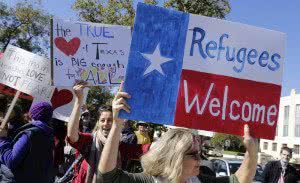 Critics of the refugee proposal point to FBI Director James Comey’s remarks earlier this year, when he worried that “gaps” in U.S. intelligence would make it difficult to fully screen refugees.

“There is risk associated of bringing anybody in from the outside, but specifically from a conflict zone like that,” Comey told the Senate panel.

Lynch replied, stating that U.S. screening measures go beyond using information from databases, and argued that the government’s top goal is the “the protection and safety of the American people.”

The Attorney General assured the committee that screening measures for refugees hoping to enter the U.S. are “robust,” as a slew of governors seek to block Syrian refugees from entering their states.

Furthermore, according to the U.S. News & World Report, Lynch told the House Judiciary Committee that protecting the U.S. from the threat of the Islamic State and other terrorist groups is the Justice Department’s top priority, adding that more than 70 people have been charged in the last two years for alleged conduct related to foreign-fighter activity and homegrown violent extremism.

The screening process for refugee admissions is already rigorous. A group of former security and diplomatic officials recently wrote an open letter to the Obama administration arguing that the U.S. could accept as many as 100,000 refugees.  Instead,   President Barack Obama has promised that the United States will admit 10,000 Syrian refugees for resettlement over the next 12 months, after criticism that America is not doing enough. See—Plan to accept Syrian refugees.

President Barack Obama responded  to hardening opposition against the plan to relocate thousands of Syrian refugees by saying that “slamming the door” in the faces of refugees would be “a betrayal of our values.”