During the chaotic moments of arrest some citizens struggle or ‘resist’ the efforts of police; however, what happens when multiple officers are involved in an arrest and the arrestee resists them all?   Do individual officers each constitute a separate charge of resisting arrest? In State v. Jurden, No. CR–15–0236–PR, 2016 WL 3600262, at ¶1 (Ariz. July 1, 2016) the Arizona Supreme Court held that regardless of the number of officers involved, A.R.S. § 13-2508 (resisting arrest) only permits one conviction when a defendant resists an arrest in the course of a single, continuous event.

In September 2012, Samkeita Jahva Jurden entered an Arizona department store shirtless, shoeless, and with an unleashed dog.  After security unsuccessfully tried to remove him, two police officers were called to the scene. When officers attempted to arrest Jurden, he resisted by biting and kicking one, and flailing and pulling his arms away from the other. The ensuing struggle lasted a full four minutes before Jurden was subdued and handcuffs. Id.

in Planned Parenthood of Southeastern Pa. v. Casey, 505 U. S. 833, 878 (1992), a plurality of the U.S. Supreme Court, extending Roe V. Wade, held that a state cannot place an “undue burden” on a woman’s right to have an abortion; consequently, a provision of law is constitutionally invalid. 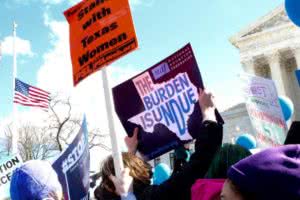 Jurden was indicted on two counts of aggravated assault, one count criminal trespass, and two counts of resisting arrest under A.R.S. § 13-2508 (A) (1).  At trial, a jury found Jurden guilty of all but one aggravated assault charge.  On appeal, Jurden argued that his two convictions for resisting arrest stemmed from a single offense, and, therefore his second conviction arose from the same offense and violated the Double Jeopardy Clause.  The Arizona Court of appeals agreed and vacated one of his convictions.  State v. Jurden, 237 Ariz. 423,429 ¶21, 352 P.3d 455,461 (App. 2015)

The Arizona Supreme Court granted review for fundamental error “because whether § 13-2508 authorizes multiple convictions and punishments for resisting arrest in one, uninterrupted course of conduct that involves more than one officer presents a recurring issue of statewide importance.” State v. Jurden, No. CR–15–0236–PR, 2016 WL 3600262, at ¶6 (Ariz. July 1, 2016).

At issue, is whether A.R.S 13-2508 (A) (1) is victim directed, as the State claimed, or is event directed, as Jurden argued.  If the Court agreed with the State, then a separate offense is committed for each officer against whom physical force is directed during the course of an arrest. Conversely, if the Court sided with Jurden, then subjecting him to conviction and punishment for two counts of resisting arrest violated the prohibition against double jeopardy.

Agreeing with Jurden, the Arizona Supreme Court held “§13-2508 describes an event-directed unit of prosecution that prohibits multiple convictions and punishments for resisting arrest when, as here, the counts stem from one, uninterrupted event.” Id. at ¶17.

An event-directed unit of prosecution satisfies both purposes of the statute. The purpose of protecting officers is advanced with an event-directed offense because whether a person resists one or several officers in a continuous event, he may be charged with and convicted of resisting arrest. A single charge of resisting arrest in each uninterrupted course of conduct satisfies the purpose of mandating submission to the state. Id. at ¶21

[…] For the foregoing reasons, we vacate the opinion of the court of appeals, vacate Jurden’s second conviction for resisting arrest, and affirm the remaining convictions and sentences. Id. at ¶27