For those of us who live near or spend our some of our vacation time in these Western States, dominated by beautiful federally-controlled lands and enclaves —millions and millions of acres of National Forests, National Parks, National Recreation Areas, National Wildlife Refuges, to name a few– some of us have had close encounters, not with Grizzly Bears or ravenous packs of Coatimundis, but with the occasional lone straw- hatted bi-ped, suited in green, badged and armed, spilling copious carbon emissions from the tailpipe of his idling green truck, and wielding his little ticket book.

Be it littering, parking violations, failure to stuff day-use fees down the throat of the “fee tube” or “iron ranger”, violations campfire restrictions (you may not have known about) , trail or road restrictions (same) , many of us have had these buzz-killing encounters with these denizens of parking lots and vault toilets, interpretive kiosks and concrete picnic benches, and been lectured sternly by them about our solemn “options,” while summarily issued the proverbial ticket– which may be hard to decipher.

Many of these violations people commonly receive may seem minor to us, even absurd— but be aware: You can wind up as a criminal “defendant” in United States District Court answering to Federal criminal charges. And if you don’t show up in court on the day and hour designated —maybe you live in Philadelphia and Court is in Grand Canyon Village (a real possibility)— the Federal Magistrate Judge assigned can issue a warrant for your arrest. What’s worse, you can wind up in the end actually with a federal criminal record, as crazy as that sounds. This article is designed to serve as a short guide to deciphering the ticket and avoiding the biggest and most common pitfalls while navigating the federal “misdemeanor” vacation-land enforcement system.

The Contours of Misdemeanors in Federal Courts

For starters, it may not be clear what exactly which law, regulation, or code section you actually violated. This should be spelled out clearly on the face of the ticket but sometimes it’s not. Know this: There’s two completely separate bodies of law—encompassing hundreds and hundreds if not thousands of “code sections” –at the disposal of these denizens. Either you may be charged for committing a specific State crime or traffic violation, on federal land, or committing any one of a host of federal regulations.

You might ask how can a federal officer ticket you for a state crime or traffic violation?

A federal enabling statute known as the “Assimilative Crimes Act” (18 USC § 13) allows any federal officer to issue tickets for violations of state criminal laws that occur upon federal land within the state. But these federal law enforcement officers don’t always know state criminal and traffic law, and the charge might not always make sense.

Second, a federal law enforcement officer can and will ticket you directly with a federal offense—A Class A, B or C “Misdemeanor”, a “petty offense” or an “infraction.” Most of these, at least the most commonly used, are buried in a thicket of regulations, some obscure, some sensible, collected in a multi-volume hundred- pound tree-killing Government Printing Office treatise entitled the “Code of Federal Regulations”—there are hundreds and hundreds of provisions—covering everything from the taking of wildlife and artifacts, seashells for example, to parking, to camping and paying fees, to feeding the bears and racoons and marmots. There are many that most people do not even know exist, and surely even if you had a dim idea that they should or might exist, didn’t know that you are committing a federal crime by violating them.

Five Surprising Ways You Can Lose Your Driver’s License in Arizona without Ever Driving.

For example, let’s say you get a ticket for failure to display your “day-use” fee receipt on your dashboard, or you get ticketed for skinny dipping at “Bridal Veil Falls”? Or ticketed t for having a campfire on the beach, or camping outside an “improved” site? How do you know if this is a “crime” “Petty Offense” or “infraction?” It may be difficult to divine at first blush.

Third, and even more confusingly, sometimes the basis of the offense is not a direct violation of a federal law state law or codified regulation at all, but rather, a derivative “order” issued unilaterally at the whim of a single green suited official—an order which you are supposed to know about (they’re supposed to be posted and make clear what you cannot do—and theoretically say why). Some of these “orders” purport to incorporate a state’s traffic laws hook line and sinker, without naming the state or the specific laws.

But as with many things—you are encouraged, faced with this miasma, to simply take the easy way out—sometimes without really understanding what you are facing. There almost always is the “option,” ballyhooed by the denizens, as they invariably inform you, you can just pay the “fine” now in the enclosed envelope of course and then “nobody will know,” “just you and me.” But it is sometimes difficult to even understand at the outset what exactly you have been charged with and if you have been charged with a crime or just an infraction, much less whether the charges are justified. You might say—”these guys know what they’re doing” —but more times than you think, they don’t.

Learn ten surprising ways a DUI can hurt your future. Tucson DUI lawyer, Michael Harwin explains the affects of a DUI, and what to do in this situation. 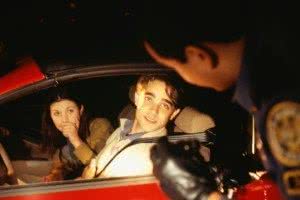 To make things worse, if you don’t take the invariably offered easy “option” and pay right off the bat, your initial punishment is that charges will be issued and recorded by the “Central Violations Bureau” in Texas and you will be hailed into Federal Court, with a place on the federal docket, that will remain, as an inscribed record, as the crow of Edgar Allen Poe cackles “Forevermore. Forevermore.”

So your initial punishment for exercising your rights is to be given a searchable federal public record. Your second punishment is to have to actually appear physically in United States District Court in a place close to where the “offense” allegedly occurred.

Again, if you have to travel from say Philadelphia to Grand Canyon Village, just for this, or from Toledo to Tucson to answer to federal charges, you may sensibly think twice, and simply pay the $150.00. Who wouldn’t?

But in an opaque case, only by exercising your rights will you then have a better idea of the nature and viability of the charged offense.

So let’s say you go to Court. If it’s a “class A” misdemeanor, the court will advise you of your right to appointed counsel. If it is a “class B” or “Class C,” a “Petty Offense,” or a simple “infraction” you will not have the right to counsel but can hire your own. But again, I stress that you must appear.

This can seem sort of like the federal version of being issued a speeding ticket by a barbecue- bellied smokey in rural Alabama or Georgia, as you pass through innocently on the Interstate.

But you’ve got the right to fight these federal charges, and sometimes you feel you’ve done nothing wrong, certainly nothing illegal. It may in those cases be in your decided interest and the public interest at large to consult a qualified lawyer before simply giving up your rights and acceding to the will of a government official. I hope this helps.