The year 2020 was the year of many things, a few good, many horrendous. One of the little known bright spots of 2020 perhaps lost in the extensive media coverage of the COVID19 pandemic and the presidential election, was a small amendment to Federal Rule of Criminal Procedure 5, but which promises to have outsize consequences, helping the criminally accused.

On it’s face, the DPPA merely adds a few sentences to a Federal Rule of Criminal Procedure (Rule 5).

But looking beneath the surface, the DPPA is a deep response to a current running long and strong under the criminal justice system. It is not overstatement to say that the DPA underscores a sea change, long in the making, in our national thinking about a prosecutor’s duty to provide “exculpatory” evidence

As we all know, there are far too many infamous cases where the prosecutors and police have sat on exculpatory if not exonoratory evidence, while courts have generally accorded prosecutors every courtesy, and the benefit of many doubt, and innocent people have been incarcerated for decades.

This includes, for example, any and all impeachment evidence of witnesses, including the police — all evidence that would tend to diminish their credibility. This would include police officer personnel and internal affairs files, civilian witness criminal records, identities as informants, and the like. It also includes documents, data, and other evidence calling into question the reliability of many ballyhooed scientific tests, such as ballistics, DNA, fingerprints, breath, blood , urine, and the like. And it also includes video recordings.

As intimated above prosecutors historically have provided to the defense only the evidence they think is “relevant.” I had one judge say to me recently when I asked for Brady material on a State Court felony, that yes, he would order the State to provide all materials it “intended to use as trial.” I had to remind him, no, Your Honor, with all due respect, the test isn’t whether the State is planning on using this information at “trial”–it’s the opposite—it’s exactly what they don’t want to use at trial, and probably wished didn’t exist—it’s the information I would want to use at trial and the state probably doesn’t want me to even know it exists. That’s Brady material.

And at risk of stating the obvious, here, since the state holds the keys to the exculpatory information, they get to decide, it seemed, at least until several months ago, for the most part, what and when to provide. And judges, as I’ve stated above, have traditionally gone along with it, excusing prosecutors who claim a Brady violation was “inadvertent.” 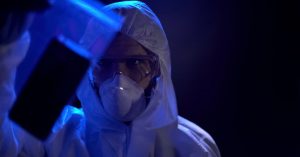 For example, in the now famous case of United States v. Cliven Bundy, Ammon Bundy, Ryan Bundy and Ryan Paine, et. al., Cliven, his two sons and sixteen other persons were charged with impeding, obstructing , and threatening federal law enforcement officers after they tried at gunpoint to impoind Bundy’s herd of cattle for a twenty year failure to pay federal grazing fees on half a million acres of federal land. 968 F.3d 1019, 1023 (9th Cir. August 6, 2020). In response, the Bundy’s and thousands of armed supporters engaged in a stand-off with at the 160 acre Bundy Ranch in rural Nevada, near the Arizona border. Id.

The Bundy’s central defense in the case was of “self-defense,” and they sought before trial pursuant to Brady v. Maryland 83, S.Ct. 1194 (1963) evidence that showed the “presence of armed officers in tactical gear taking positions around the Bundy Ranch.” Bundy, supra, 968 F.3d at 1054. After the jury trial started, prosecutors disclosed video evidence of armed government surveillance of the Bundy Ranch, and a mass of armed federal agents including snipers, all of which the government had had in its possession for months or even years, but claimed wasn’t “relevant.” . Id.

Yet, there was no question that this was “exculpatory” material, as it went right to the heart of the defense of “self defense.”

In Bundy, the trial declared a mistrial and dismissed the case with prejudice for prosecutorial misconduct. Id. On appeal, the 9th Circuit upheld the dismissal.

The Due Process Protection Act, signed by President Trump into law a few months ago addresses the particular problems raised by the Bundy case, and seeks to solve them, by codifying the obligation, and making disclosure by the government of Brady material, one of the very first things that gets addressed now in any criminal proceeding. In fact, the DPPA now requires all federal judges at a defendant’s initial appearance to issue an oral and written order reminding the prosecutor of her disclosure obligations, and listing the “possible consequences” for violating such an order. See Federal Rules of Criminal Procedure, Rule 5(f) (2021).

So, the answer to the question raised by the title to this blog, is yes, the prosecutor pursuant to the United States Constitution Amendments V & XIV due process clause, Brady v. Maryland, United States v. Bundy, and now Federal Rule of Criminal Procedure 5(f) must provide all material that mitigates guilt or punishment, whether the prosecutor thinks its relevant or not.