Last time, we spoke about one particular sometimes spurious excuse that DUI police in Arizona tend or in some cases love to use to justify late night stops: ARS 28-729.1 “touching” or momentarily “crossing” a lane divider. Today I want to speak with you about some other sometimes equally spurious reasons police use to justify late night DUI stops. 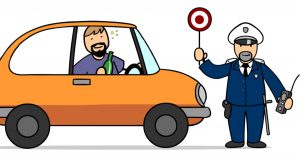 Another police favorite is the proverbial “following too closely” statute. ARS § 28-730 provides: “The driver of a motor vehicle shall not follow another vehicle more closely than is reasonable and prudent.” I see a lot of stops, especially by DPS for this reason. But this seems to give the police an awful lot of discretion. I mean who is to say what is “more closely than is reasonable and prudent?”

Therefore, I always ask the officer during discovery for not just an estimate of how far and how fast and how long, but also to nail down the officer’s claimed angle of view, and his other basis, or lack thereof, for estimates of speed and distance. Sometimes I think the reasoning spurious. And occasionally courts agree.

In an unreported recent case, State v. Moses 2018 WL 6380311 (Ariz. Court of Appeals [Div 1], December 6, 2018), for example, the officer, parked in the median, thought the suspect driver was suspicious because the driver was low in his seat and moved rom the fast to the slow lane after passing the officer. The officer followed the defendant for three miles, driving in his blind spot and tailgating. He pulled the defendant for follow forty feet behind a semi-truck going 70 MPH. The Judge questioned the plausibility of the officer’s estimates of speed and distance, finding the stop to be “spurious.” State v. Moses, supra, 2018 WL 6380311.

Another particularly popular purported “violation” is for a “wide right turn” or “wide left turn.” Both are covered by the same statute, but slightly different standards apply.

ARS 28-751.1 provides: Both the approach for a right turn and a right turn shall be made as close as practicable to the right-hand curb or edge of the roadway. Note, first, that the statute does not mandate that the drier turn into any particular lane. In other words, it doesn’t specify which lane you are supposed to turn in. It never mentions lanes, at all.

Second, there is that pesky term “practicable” again. We discussed it last time when we spoke about ARS 28-729., particularly in reference to State v. Livingston where Judge Eckerstrom wo sits on the Arizona Court of Appeals specifically interpreted the term “practicable” to mean that the legislature did not intend to penalize momentary or minor deviations.

But note that the police, especially those doing DUI enforcement, like to use 28-751.1 to excuse a late-night stop made on a “wide right turn” where the driver doesn’t turn into the curb lane.

The police actually hang out at popular intersections near bars where, sometimes based on intersection design most drivers naturally turn into the second lane, often a function of length width and something called “turning radius.” We have spilled a lot of ink, a lot of video footage and done a number of studies on particular intersections favored by police, demonstrating that most people turn into the second lane. We once even had a case where we, purely serendipitously, caught a police officer making the turn exactly the same “wide” way our client did. It worked out well for us.

In contrast, 28-751,2, requires that a driver turning left shall “approach the turn in the extreme left-hand lane …[]and [if] practicable the driver shall make the left turn from the left of the center of the intersection and shall make the turn into the left lane immediately available for the driver’s direction of traffic.”

That’s quite a mouthful. Most courts interpret this subsection in contrast to the right turn subsection, as required a tight left turn into the first available lane. Although the term “practicable” appears also in that subsection, it seems that courts recognize the inherent elevated risk in turning left, and merging with traffic.

Failure to use turn signal

Finally, we’ll talk today a little about turn signals, a favorite topic. ARS 28-754, another DUI police favorite, provides in part: “ … A person shall not turn any vehicle without giving an appropriate signal in the manner provided by this article in the event any other traffic may be affected by the movement.”

Vehicular offenses are crimes which involve: motor vehicles, alcohol or drugs, juveniles or persons under 21, commercial drivers, and dangerous driving.

Nothing in the statute requires, as a bright line rule, that a turn signal be used unless other traffic may be affected.

In an early seminal case the Ninth Circuit held in United States v. Mariscal 285 F.3d 1127 (9th Cir. 2002) that “other traffic” does not include a parked police vehicle. But in a later case, the Arizona court of appeals held that “other traffic” includes police vehicles driving on the road. State v. Salcido 238 Ariz. 461 (App. 2015).
[
The take-way for this is that for Arizona’s blinker statute, when used as a cheap excuse to stop a driver doesn’t always fly. I would want to establish that no other traffic was “affected” and of course that the police were doing DUI enforcement at the time of the stop.

In great summary, in addition to the “weaving” statute, police love to use “following too closely,” “wide turns” and “failure to use turn signal” as excuses to stop late at night when they are doing DUI enforcement. Occasionally, through dint of work during discovery, we can tease these out as spurious reasons, and Courts will sometimes agree, dismissing cases.

SIDA badges are necessary for everyone from pilots to janitorial workers that need regular access to areas in the airport that are behind the security checkpoint.